Fearless teen Anne Boonchuy is magically transported to a rural marshland full of frog people and meets the excitable young frog Sprig Plantar and his family.

The show tells the story of Anne Boonchuy, a self-centered 13-year-old 7th grader who is magically transported to the fictitious and magical world of Amphibia, a rural marshland full of anthropomorphic frogs, also known as Amphibians. With the help of an excitable young frog named Sprig Plantar, Anne will transform into a hero and discover the first non-human friendship of her life.

The episodes are usually split into 22 x 11-minute segments. For full-length episodes, they're split into 21x7 segments, but no episodes aired with that format. There is also a half-hour special that is the finale of the first season.

Rough Draft Korea, Sunmin Image Pictures, and Saerom Animation each provides animation for the episodes, and it takes about nine months for each episode to be complete.[1] 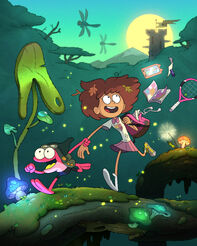 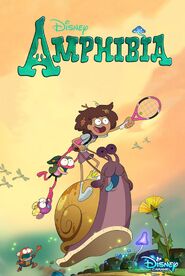 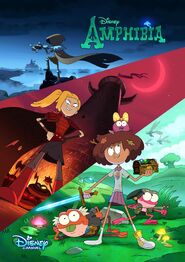 Retrieved from "https://amphibiapedia.fandom.com/wiki/Amphibia_(series)?oldid=21360"
Community content is available under CC-BY-SA unless otherwise noted.