"... Fail and nothing will ever be the same." ― Captain Grime[source]

To squash the rebellion by killing Hop Pop Plantar

Sasha lying to him and his army (formerly)

He was knocked off the top of Toad Tower by Hop Pop but manages to survive then saved Sasha and leaves with his army to parts unknown.

"We are here..... To invite you to a banquet"
"Hello Anne Boonchuy"
"The Toad-Fashioned Way!"
"I really am an "old softie"

Captain Grime is a villainous one-eyed toad who is the ruler of Toad Tower and the main antagonist of the series Amphibia. He is also the leader of The Toad Army.

Captain Grime is a large green toad. With a more terrifying appearance than any other of the toads, he possesses one glowing yellow-green left eye while his right one is injured with a scar leading down to his lower jaw and has sharp yellow teeth. He wears brown metal amour with a dark, purplish cape. He has a very large and muscular build. He also wears leather shoulder padding and brown boots.

Grime is a character who feels he must always be respected with his discipline among his crew of knights, and before Sasha told him that his army would respect and listen to him better if he were nicer, he was very rude and disrespectful to his army. He was likely this way because he expected them all to toughen up from his downplayed words, but it only ended up making the other toads feel weaker and worse off. Since then, he has been very respectful to his toads and continues to honor their loyalty to him, and in return, they strictly begin to follow his commands.

His frustration can still be shown at times after having become aware of the conflict and rebellion proceeding throughout Amphibia, with many villages beginning to rise up to the toads and refusing to pay up during their monthly tax collecting trips. But his confidence in restoring order has continued to lift as not only have his fellow toads' spirits brightened up, but he believes with someone as ruthless as Sasha by his side, he can succeed in his mission.

Though he has his bad side, he still respects those who aid him and even saved Sasha as she was falling from the crumbling Toad Tower even though he was risking his own life.

The word Grime means 'dirt, soot, or other filthy matter, especially adhering to or embedded in a surface'.

Grime's appearance; particularly his body shape and his oddly clawed hands, looks extremely similar to Mayor Toadstool, which may allude to him being a toad too.

Grime is voiced by Troy Baker. He speaks in a Russian accent.

Grime first made a cameo in "Best Fronds". 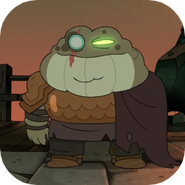 Retrieved from "https://amphibiapedia.fandom.com/wiki/Captain_Grime?oldid=21332"
Community content is available under CC-BY-SA unless otherwise noted.