Different voices in many shows

Dee Bradley Baker is an American voice actor known for his roles as animals in various animated series, films, and video games.

He plays the role of Bessie. 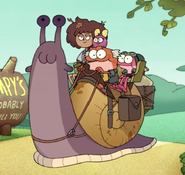 Baker was born in Bloomington, Indiana, and grew up in Greeley, Colorado. He started performing at age nine and steadily worked in musicals, operas, plays, and stand-up comedy. He graduated from University High School, received a Boettcher Scholarship, and attended Colorado College in Colorado Springs, where he studied philosophy, biology, fine arts, and German. After graduating with a BA in philosophy, he was involved in many community theatre projects, including a sketch movie that aired on local public television.

Baker moved to Orlando in 1989 to work on an improv sketch comedy show called "The Anacomical Players" at EPCOT Center's Wonders of Life pavilion, and joined various projects for Disney and Universal Studios. His first major experience on national television was on the Nickelodeon game show Legends of the Hidden Temple, where he was not only the announcer but also the giant talking rock-god Olmec. The show lasted three seasons and 120 episodes. In 2016, Baker reprised his role as Olmec in the live-action television movie adaptation of Legends.

Baker's first major character in voiceover work was Cow & Chicken's dad in Cow & Chicken and I.M. Weasel. His first feature film voiceover was in Space Jam, where he voiced Daffy Duck and the Tasmanian Devil. He did voice work for various episodic and recurring cartoon characters on The Real Adventures of Jonny Quest, Johnny Bravo, Dexter's Laboratory, SpongeBob SquarePants, and The Powerpuff Girls. In 2001, he added voice roles for Sanjay, Binky, and other characters for The Fairly OddParents. He had a lead role as Numbuh 4 in Codename: Kids Next Door.

Starting with gigs on The Wild Thornberrys, Baker voiced an assortment of animal characters, which would become one of his specialties. Among his more notable roles as animals include Appa and Momo in Avatar: The Last Airbender, Perry the Platypus in Phineas and Ferb, Waddles the pig in Gravity Falls, many alien creatures in Ben 10 and its sequel series, and Animal in the 2018 Muppet Babies reboot.

In 2005, Baker landed the starring role as Klaus Heissler in the primetime animated sitcom American Dad! In addition to television shows, Baker voiced characters in many animated and live-action animation films, including some of the classic ghost monsters in Scooby-Doo 2: Monsters Unleashed. For his role as the Clone Troopers in Star Wars: The Clone Wars, Baker received an Annie Award nomination for Voice Acting in a Television Production in 2012.

In the video game world, Baker voiced Gravemind in Halo 2 and Halo 3, and the title character Joe in the Viewtiful Joe series.

Retrieved from "https://amphibiapedia.fandom.com/wiki/Dee_Bradley_Baker?oldid=40813"
Community content is available under CC-BY-SA unless otherwise noted.