Fungi is the kingdom containing organisms that reproduce with spores. Examples include mushrooms and toadstools, both of which are regularly used in Amphibia.

Different fungi (mostly toadstools) are seen frequently around the forests, but occasionally around the town, mountains, and lakes.

In Amphibia, they're used mostly for food and spice, as well as decor, steps, and stools. Bioluminescent species are often used as light sources, activated when hit. 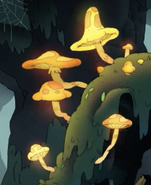 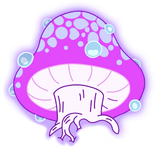 Add a photo to this gallery
Retrieved from "https://amphibiapedia.fandom.com/wiki/Fungi?oldid=22446"
Community content is available under CC-BY-SA unless otherwise noted.