"Ambush!
Ivy Sundew is a minor character in Amphibia. She is friends and sparring buddies with Sprig Plantar.

Ivy bears an innocent appearance and is significantly smaller than Sprig. Her skin is yellow with a pale patch under her mouth and dark spots on her cheeks and her two tufts of hair are orange.

As in Locust Pocus, she seems to be a loud energetic character similar to Sprig, which may be the cause of his feelings. In "Dating Season", Ivy Sundew likes to "ambush" Sprig a lot and is still very loud and energetic. She is stated to be his sparring partner and seems to be very amiable towards new people she meets. She can also be forceful, as seen when she asked Anne if she likes being randomly attacked, and responded with "too bad" when told no.

In "Anne of the Year", it was revealed that she has the same feelings for Sprig as he did for her. 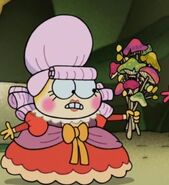 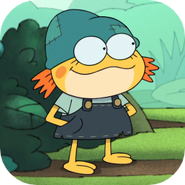 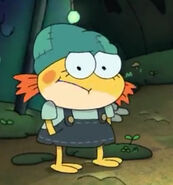 Retrieved from "https://amphibiapedia.fandom.com/wiki/Ivy_Sundew?oldid=19335"
Community content is available under CC-BY-SA unless otherwise noted.