Braly graduated from the California Institute of Arts with a major in character animation. He interned at Pixar and had a job as a story artist at DreamWorks. He joined Disney Television Animation in 2011. Braly had previously worked on Gravity Falls and Steven Universe, as a storyboard artist and revisionist, as well as working on other Disney shows such as Billy Dilley's Super-Duper Subbteranean Summer, Big City Greens, and DuckTales, he also worked on a 2013 film, Turbo. He had recently left working for Big City Greens in order to create his own animated series, Amphibia. 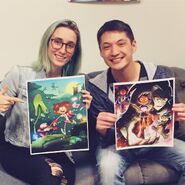 Retrieved from "https://amphibiapedia.fandom.com/wiki/Matt_Braly?oldid=22324"
Community content is available under CC-BY-SA unless otherwise noted.