"A Day at the Aquarium"

"Stop right there! You know you can't take me!"
"Just give me an excuse to use old Doris, here!"
*gasp* "Candy from another world? Lady, you got yourself a deal!"

Polly Petunia Plantar is the tritagonist of Amphibia. She is the younger sister of Sprig and granddaughter of Hop Pop Plantar. She is a polliwog, which is one of the younger stages of a frog.

She is an outgoing and mostly fearless tadpole, although she is afraid of wax figures and olms. She loves adventure, monsters, and having fun with her family. Although she is young, she has the heart of an explorer. She is mysterious, explosive, and unpredictable, such as favoring to attack stuff using either her flail or her rolling pin she named "Doris". Even though she’s usually more responsible than her older brother Sprig, she still retains infantile tendencies, namely being easily swayed by the temptation of candies.

Polly resembles a real-life tadpole, albeit she has arms instead of legs and is more globular in appearance. She has a yellow bow with lighter white/yellow polka dots. Unlike the other Amphibians, she has a blue tongue rather than green. She often moves in a wooden bucket filled with water and held together by a cylindrical steel frame. It has seen a fair amount of use apparent in its worn appearance. She also is seen without it and hops around instead.

Click here to view the relationships of Polly Plantar.

Polly’s name is a pun on the word, pollywog, in which her species is the said creature. Her name also comes from her ancestor, Polliana Plantar.

Polly is voiced by Amanda Leighton.

Polly made her debut in the series premiere, "Anne or Beast?". 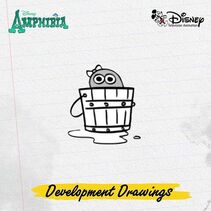 To view the various designs of Polly Plantar, click here.

Retrieved from "https://amphibiapedia.fandom.com/wiki/Polly_Plantar?oldid=46850"
Community content is available under CC-BY-SA unless otherwise noted.