Season 2 (also titled Part 2) of Amphibia was first hinted in a Twitter post by Matt Braly on April 24, 2019,[2] and was officially announced on May 15, 2019, one day after the official trailer was released and one month and thirty-two days before the show's official premiere.[3][4] It will premiere in Summer 2020 stated by Braly.

Anne and the Plantars go on a road trip in search of information to get Anne home. She'll meet new friends and familiar faces along the way.

A storyboard artist making the storyboard (which can be seen to the left) with multiple reference sheets and posters behind him. 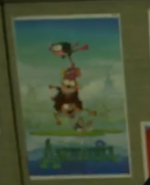 One of the posters seen in the background of the last image; Anne, Sprig, Hop Pop, and Polly on a Lilypad floating in the river.

Sprig in an untitled episode shared by Matt Braly on Twitter.
Add a photo to this gallery

Retrieved from "https://amphibiapedia.fandom.com/wiki/Season_2?oldid=22342"
Community content is available under CC-BY-SA unless otherwise noted.