"A Day at the Aquarium"

To help Anne get home

"I'm Sprig Plantar! Put 'er there!"
"Does this look like a face that could deceive you?"
"Levers are for pulling, Anne!"
"You must be so excited to be trapped in another world. Veeery jealous."
"I'm the fun Plantar!"
"For someone who's Anne's best friend, you sure don't know her very well. She's brave, she's smart, and most of all she's not going to be pushed around by a bully like you!"

Sprig Plantar is a 10-year-old frog who is the best friend and guide of the human girl Anne Boonchuy. He is the grandson of Hop Pop and the elder brother of Polly.

Sprig is an anthropomorphic frog of a small height. He has hot pink skin, with a paler shaded underbelly. He has short orange hair underneath his green hat.

As his everyday clothing, he wears a dark forest green hat with light green goggles and a sleeveless jacket paired with black shorts. He has worn his hat since he was a small pollywog.

In "Dating Season", Sprig's head is colored light pink, owing to the use of makeup powder, and he has orange powdered cheeks. He has a fancy yellow beret-beanie-esque hat with blue feathers arranged next to each other in a pattern. Around his neck, he has a big white Tudor collar. He has a very short green shirt with big-round shaped sleeves embroidered with seed-like shapes. He has puffy pants with thick vertical stripes with the pattern ranging from the colors of green to yellow. It also appears that the outfit is much too big for him and he's clearly uncomfortable and has limited movement while wearing the courtship kit.

When he was a tadpole, he somewhat resembled his younger sister, Polly. He wore a dark forest green hat with the beige-colored goggles. He is also very circular, also possessing also has a light pink tail.

In the Amphibia pilot, "Amphibiland", Sprig (named Weed at this point) sported a much different body, different clothes without the hat and goggles, smaller eyes, and a blue tongue instead of a yellow tongue.

Sprig is an overly excited frog, He is a very adventurous and energetic frog child, both qualities that can bring him to adventure and into trouble respectively.

Despite acting carelessly at times, he is utterly loyal to his friends and family, and will ultimately do what is right in the end. He usually pushes important stuff out of the way and tries to find the most fun things to do. When he does so, he causes danger for his family and friends always tries to do what's best for others around him whether he likes it or not.

In "Civil Wart," Sprig gets upset that Polly being the youngest gets more attention and rights than him from Hop Pop, feeling that since Polly is young he has to give up numerous things for her. Not till after starting a war against two teams of Wartwood in the episode "Civil Wart", Sprig realizes that he is supposed to protect his younger sister and care for her. Which can be seen in future episodes as he is by her side and has fewer arguments with her.

Sprig can be clingy and jealous at times like in "Family Fishing Trip" and "Marcy at the Gates" when he acts like he's suspicious of Marcy but in reality he just jealous of her and doesn't want to lose Anne.

Role in the series

From the start of the series, Sprig starts off as being considered something of a strange kid in the town of Wartwood. Over the course of the first season, however, this begins to change through the influence of Anne Boonchuy while also changing her perspective as well. Along with the rest of the Plantars, they slowly begin to gain some respect from the town with many people looking at Sprig as the "fun Plantar."

One of the story arcs in season one involves Sprig's personal relationships. In "Hop Luck," he ends up getting engaged to Maddie Flour, albeit forcibly by Anne in an effort to get a bit of dough. Later on in "Dating Season," Sprig is revealed to be friends with Ivy Sundew, an old acquaintance. At the end of the episode, Sprig suddenly realizes that he is in love with Ivy and makes it his goal, through the encouragement of Anne, to admit his feelings to her. While Maddie makes spare appearances, Sprig still brings her up in a resigned manner. While he likes her, he considers her too weird and creepy. It is not until the episode "Cursed!" when he finally breaks up with her and learns that despite her weirdness, she simply wants to be friends with him and he accepts her. In "Anne of the Year," he and Ivy are finally able to admit their feelings for one another.

Sprig also spends numerous amounts of time learning from his mistakes and maturing somewhat. In "Sprig Vs. Hop Pop", he learns to be more accepting of rules and in "Trip to the Archives" he realizes that even though he would rather have fun, he should be more concerned with helping Anne with her problems instead.

Click here to view the relationships of Sprig Plantar. 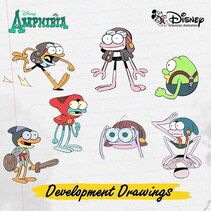 To view the various designs of Sprig Plantar, click here.

Retrieved from "https://amphibiapedia.fandom.com/wiki/Sprig_Plantar?oldid=47263"
Community content is available under CC-BY-SA unless otherwise noted.