"I've seen and heard it all..."
Valeriana is one of the vendors at the Bizarre Bazaar, she sells many treasures she found in her years of travel when she was younger, and she claims to have "seen and heard it all". She also has a parrot-looking pet named Liander.

She is dark brown with a yellow underpart, and yellow spots on her tail (most likely across her back too). She has red eyes, with vertical, dark red pupils, and short, grayish-blonde hair. Her tongue is a slightly light tone of teal, and the inside of her mouth is the darkest tone of the previously said color.

She has reddish-brown "crests" over her eyes (which resemble eyelashes), similar to a crested gecko. However, she is most likely a salamander, since geckos are reptiles, and all the reptiles in the series have been wild animals.

She's missing an arm, but uses her tail as if it was her replacement. Her left eye also appears to be hurt.

"Could it be, Liander? Could she be the one we've been searching for?" ― Valeriana[source]

"No Liander! Not in the carpet!" ― Valeriana[source]

Valeriana is voiced by Susanne Blakeslee. 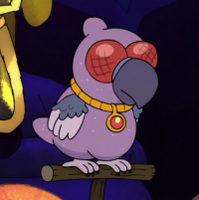 Retrieved from "https://amphibiapedia.fandom.com/wiki/Valeriana?oldid=19114"
Community content is available under CC-BY-SA unless otherwise noted.