The Zapapedes are centipede-like creatures that live up in The Misty Peaks, in the Mountains of Amphibia. When active, its electrical power creates an electrical current across their antennae-like horns.

They are golden yellow, with a pale yellow underbelly. They have two green eyes, one slightly darker than the other. The lighter-green eye has a positive sign, and the darker eye has a negative symbol. The eyes are sometimes flipped, but the positive and negative symbols are always on the lighter and darker eye, respectively. They have three pairs of short brown legs, much like a caterpillar. Their electrical horns are brown, with darker to lighter ascending layers. The Zapapede also has yellow, sharp mandibles at the front of their heads. 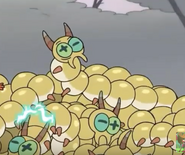 Retrieved from "https://amphibiapedia.fandom.com/wiki/Zapapede?oldid=29989"
Community content is available under CC-BY-SA unless otherwise noted.